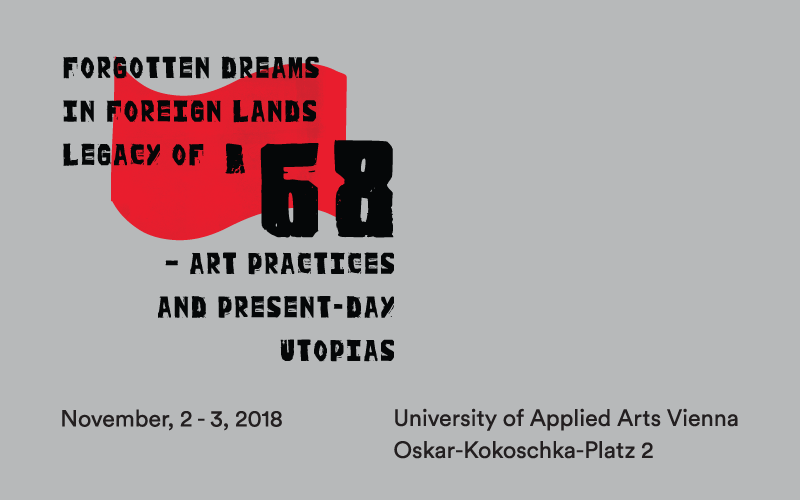 The turbulent political and social situation of Europe today gives rise to the question on how do we assume the future of the European Union and its humanistic postulates. Some points in history had crucial importance in the development of our societies, but are those times just a forgotten dream of once  traversed  lands,  or  an  embedded  potential  inherited  by  each  succeeding  generation?  The year of 1968 truly rocked the planet, calling political elites on the West and East for accountability. The fight for human rights, freedom of speech and mobility were spreading across the borders and political systems, uniting critical masses and finding common ground for a Transeuropean movement. It could be argued that this struggle continued and had an important role in the attempts of political liberalisation from the Soviet Union’s domination in the East and had a kind of the climax in the fall of the iron curtain in 1989. It marked an end of one totalitarian regime and should have signalised the beginning of united Europe.The past and heritage of the the Second World War still had been present in the memory of its social actors.

1968 was a seminal year for Austria and the city of Vienna as well. In the summer, as the wave of migrations from Czechoslovakia approached, Vienna transformed into “a heaven of humanity” – it provided a shelter to a large number of the refugees from neighbouring country, escaping the Soviet oppression and fleeing toward the Austrian capital.
In the early 60’s, an artistic movement emerged, radical and performative in its nature – the Actionism, as a reaction to a climate of change in Europe. In the ‘68, this short and violent artistic movement has marked the beginning of its end as it tipped into illegality after the performance Kunst und Revolution at the University of Vienna. This intense artistic event is remembered by the art historians as the most important Actionists’ joint work, as the artists summed up their previous performances in a single artistic event. Through the staging of a violent manifold performance, for a brief moment, they took over the University of Vienna.This unconventional, society-breaking spectacle, a taboo of the time, was a night to remember for the Viennese art scene.

To say that Europe looks different 50 years after 1968 would be an understatement. Yet, although many Europeans live to some extent in a similar reality (in alienation from the politics and institutions, under the threat of growing radicalism, scared of terrorism, connected by social media and exposed to post-truths, in ongoing refugee crisis that is being utilized as a fuel for right-wing movements and xenophobia, supporting #MeToo movement or #BalanceTonPorc, etc.), it would still be hard to imagine such vigorous international solidarity, let alone a global movement that could emerge today and would be comparable to the one in 1968. For centuries now, art has acted not only as a reflection, but also as an effecter of social change. It could be argued that the underlying mission of contemporary art is to act as an ever more incisive element in social changes and a generator of new ideas. Contemporary art as a field is constantly in the process of critical re- examination of the world around us, where artists and curators are reminding us about different aspects of the society we are living in and enabling us to reflect on the same through the mediation of the works of art.

The mission of the project is to investigate the impact of 1968 heritage on the cultural and artistic life of Austria and former Yugoslav countries today. Furthermore, the project aims to review the  avant-garde movement of that time and also to discuss present-day examples of innovative, experimental and engaged art, which in the future might be perceived as “ahead of its time” in regard to its critical influence on the larger audience.

A special focus is to map and analyse the art movements, collectives, and individuals that were/are using innovative approaches in the context of the post-modern art to address political and social issues.

During the program, the audience will have an opportunity to hear more about the mentioned topics from artists, curators, academics, researchers, and activists who were witnesses and active participants of the ‘68 upheavals, and who are active in the contemporary moment as well.

« To investigate the legacy of 1968 and how it is presently perceived by a cultural and artistic community and artistic practices;
« To discuss current tendencies and movements in the art with similar impacts to those in ‘68;
« To contemplate on the present-day utopias and how they reflect on the artistic creation;
« To discuss what characterises (young, socially engaged) art and what would be its artistic merit and potential;
« To discuss current issues in contemporary art (to analyse if the art today has the power to be the instigator for achieving social, political and economic change. What are its agendas?);
« To review the important examples of countercultures who are undertaking similar actions in order to raise awareness and advocate for social change and civil rights;

A two-day symposium program consisting of 2 panels per day will host speakers and lecturers from Austria and former Yugoslav countries (historians, artist, curators, theoreticians, writers, researchers, art students, witnesses and active participants of the upheaval in ‘68).

Day 1, Panel 1: “Political Reality and Democratic Dreams of 1968 in Europe”

Remaining three panels of the symposium you can see on the following links:

Day 1, Panel 2: “Critical Discourse of ‘68 and its Influence on Art Practices (Austria and Yugoslavia)”

Day 2, Panel 2: “Curating New Utopias: 1968 as an incentive in the case of the Curators’ Agenda Exhibition”